Janhvi Kapoor and Khushi Kapoor are the coolest, most fashionable sisters in town. They often drop super cool looks every time they step out. Their sister shenanigans always make us super envious. They are often spotted cycling and going on vacations. 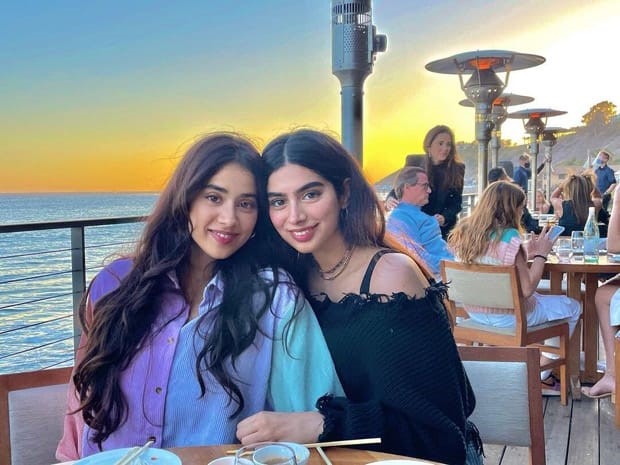 On Thursday, Khushi Kapoor uploaded a picture from their vacation in Nobu, Malibu. They’re both seen sitting by the seaside on with the beautiful clean waters and sky in beautiful colours. Khushi was seen wearing a black frayed hem boat neck sweater and Janhvi was seen dressed in a multi coloured shirt. They both kept their makeup fresh with a dark pink lip and blush cheeks and naturally wavy hair. Khushi wore a layered neck piece and Janhvi didn’t accessorize. Khushi captioned the picture, “Love u sometimes.”  To which, her elder sister responded in comments, “Oh wow can u come here and give me attention then.”

On the work front, Janhvi Kapoor was last seen in Gunjan Saxena – The Kargil Girl where she played the titular rule. She was also seen in Roohi. Meanwhile, Janhvi has wrapped Good Luck Jerry. It is an adaptation of the Tamil film Kolamaavu Kokila starring South star Nayantara. She will also star in Dostana 2.

Meanwhile, Khushi Kapoor studies in New York in a film school and is here in Mumbai for summer break. She also wishes to join the industry once she completes her education.

Previous Post: From calling Vijay ‘cool’ to responding to someone who called him ‘berozgaar’, Shah Rukh Khan celebrates 29 years in industry with #AskSRK session full of wit and wisdom
Next Post: Amitabh Bachchan shares his experience on working amidst global pandemic – “It’s getting into car, getting out and straight into the shot”