Megastar Amitabh Bachchan has resumed shooting of Goodbye after the government has eased lockdown restrictions.  The actor is quite active on social media and shares every bit of his life through his magical words. The actor recently has also shared a series of pictures on his latest blog where he can be seen very enthusiastic and in a very fun mood.

The pictures shared by Amitabh had him stepping inside the vanity van in one, in one picture he was seen posing with the frontline workers while the third picture he shared was of behind the scenes where he was standing with the cinematographer. 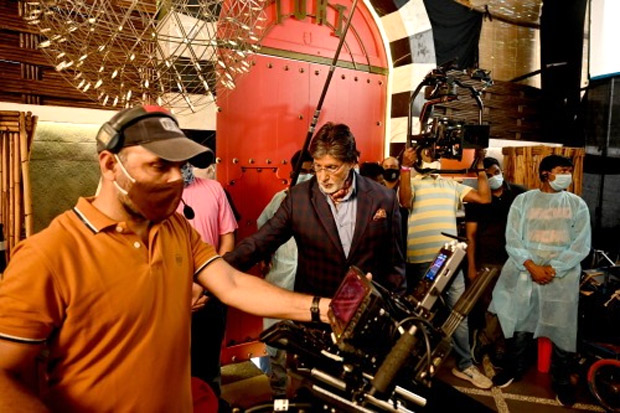 Sharing the pictures, the actor’s blog reads as “So .. as the work prepares the location a restaurant in the suburb Bandra .. you convert from what you came in to what they need you in the shot ..its getting into car getting out and straight into the shot .. no rehearsals just be .. be natural .. ok fine .. and SURPRISE.”

Apart from sharing his excitement for the shoot, the actor also shared that he waits for the day to end so that he can watch Euro Cup which takes place once every four years. The actor wrote, “It is getting on to an important time table .. the Euro game of the day .. or games of the day .. France v Portugal and Germany v Finland .. but the eyes are set on the first one .. even its late start and my early call tomorrow shall not deter the spirit of sport .. my love and concern as ever .. my prayers as ever.”

On the work front, Amitabh Bachchan will be next seen in movies like Chehre, Jhund, Brahmastra, MayDay and Goodbye.

Previous Post: Janhvi Kapoor and Khushi Kapoor are sibling goals in new picture
Next Post: EXCLUSIVE: “We did some suggestive scenes that suggested that they fall in love towards the end” – reveals Shahab Ali on his deleted scenes with Samantha Akkineni in The Family Man 2